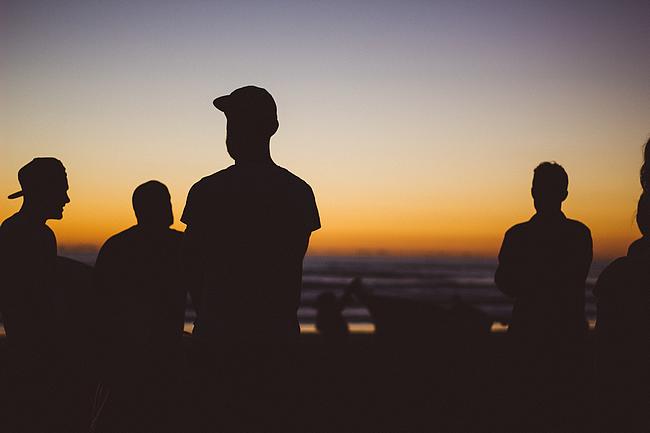 The man is much sung about. There are many famous and successful songs in which men play an essential role. Sometimes it’s about the man as a lover, sometimes it’s about his softer side, and then there’s the urgent warning from the doctors.

We now look at the male sex using 68 songs about men.

(You’ll find a Spotify playlist at the end of the article.)


In 1966, James Brown released the song he co-wrote with his then partner Betty Jean Newsome. Betty’s observations and insights provided the textual content. For Newsome, it was clear that while men were instrumental in the world, as it was through the building of railroads and automobiles or the development of electricity, they had no value without women.

The title is borrowed from the film comedy “It’s a Mad, Mad, Mad, Mad World.” The music magazine Rolling Stone called the song “biblically chauvinistic” but still included it in its list of the 500 greatest songs of all time (number 123).


The song is the first and most successful single by Percy Sledge. The title was “Why Did You Leave Me, Baby?” about the girlfriend who ended the partnership. FAME collaborator and lyricist Quin Ivy became aware of the song and asked Sledge to change the lyrics and title.

In April 1966, the ballad was released and landed in the Rhythm & Blues Charts and the Pop Charts. It did not take long for success to show itself in the form of a gold record. Accordingly, there are now many cover versions, including the one by Michael Bolton.


A song about men that has cult status. As a single from the album “4630 Bochum”, the title is one of the most successful Grönemeyer songs from 1984 until today.

The singer ventures into introspection with a dash of irony, picking up on the song that men are made from infancy to what they often stand for. Often boys hear the phrase: “A boy does not cry; you are not a girl.” Grönemeyer addresses this thinking by pointing out that men only cry in secret. At the end (he) asks himself the question: “When is a man a man?”


The American rapper released the song in 2015, featuring Kanye West and John Legend. The soulful song is about the importance of self-love and his grandma, who passed away shortly before, and had a significant influence on Big Sean’s personality development.

The music video for “One Man Can Change the World” won the 2015 MTV Video Music Award for best video with a social message.


With their debut single in 2009, the folk-rock band Mumford & Sons directly landed a commercially quite successful song that reached the Top 20 charts in some countries. In addition, the song was nominated for several awards.

Among them is also the Grammy Award in the category Best Rock Song. According to frontman Marcus Mumford, he processes a very personal story in the lyrics. It is about a situation in which he was not very proud of himself and unhappy.

Also recommend:   The 108 Best Beautiful Love Songs Of All Time


Relentlessly but with a lot of humor, the band from Berlin reveals the dark sides of men. They musically tell about the transformation of the Rosenkavalier into the animal, warn women about impossible manners in the marriage bed and advise against trusting the man.

Many Oktoberfest guests and Ballermann vacationers could be enthusiastic about the title, pleased the doctors less because this is not their target audience. Curiosity on the side: Georg Thomalla appears in the song from 1998 as the voice actor of Jack Lemmon and speaks a sentence from the movie “Manche mögen’s heiß” (Some like it hot).


The cover version of a French chanson became a success and world-famous thanks to Frank Sinatra. Paul Anka cut the song to Sinatra, who was toying with the idea of retiring. The reason was constant rumors about connections with the Mafia.

The lyrics are a man’s look back on his fulfilled life. At the end of his life, he sums up that he has lived his life in his own unique and personal way. In March 1969, the song was released.

While the commercial success in the USA was relatively moderate, “My Way” stayed in the charts in Great Britain for 42 weeks and sold more than one million copies.

In the meantime, there are about 150 cover versions, including Performerations in other languages. In 2000, the Sinatra version was inducted into the Grammy Hall of Fame.


This track’s content and music video refer to the movie “8 Miles,” in which Eminem played the leading role. At the same time, he can be heard in the film credits. While the first verse refers to the opening scene of “8 Miles,” the other two verses are autobiographical.

They describe his problems balancing entry into the rap scene and raising his daughter. “Lose Yourself” is among the most successful hip-hop songs and ranked #44 on the German charts for the entire 2000s.


R. Kelly released the single in 2002, scoring a hit in Europe. Several top 20 placements awaited here, and in the United States, the song climbed to № 34 on the Billboard Hot 100.

Originally, “The World’s Greatest” was a tribute to boxing legend Muhammad Ali. Accordingly, R. Kelly for the video in the role of the boxer. He sings about greatness, strength, power, and being a hero.


It is one of the Hits of the 60s and a real evergreen. The original version was written by Randy Randolph and was called “Percolator” (coffee machine). The theme was less well-received because it was only the version published in 1960 by Trude Herr that became a hit, in which the protagonist would rather have a man to kiss and wrap around her finger than any chocolates or chocolates again.

The song reached number 18 in the singles charts in Germany and was also featured in the hit movie “Marina.”


A man who thinks he is wonderful, another who wants to be all-knowing, and a man who defines himself by his great car. But none of them can impress the woman with it. This is the song’s message that Shania Twain released in December 1998.

Internationally, it reached number four, recorded as her third biggest single success on the Billboard Hot 100, and remains one of Twain’s biggest hits worldwide to this day.


Written by Brett James and Tim Nichols, the song secured Chris Young’s second of five consecutive number one hits on the Billboard Hot Country Songs list. “The Man I Want to Be” in the USA even went platinum.
Also recommend:   The 105 Best Cover Songs Of All Time

The song tells of a man who is not as he would like to be. It is about a failed love and the desire to become the man he wants to be with God’s help. The lyrics themselves were considered rather boring by some critics.

But that did not dampen its success.

13. Michael Jackson: “Man in the Mirror


The pop song was released in 1988 as the fourth single from the album “Bad” and became Michael Jackson’s tenth № 1 solo track in the U.S. charts. The core message is that everyone has to start with himself if he wants to change his life.

The man has to see himself in the mirror symbolically. A year after the single was released, it was nominated for a Grammy Award. In 2009, “Man in the Mirror” made a comeback after Jackson’s death and again rose to number two on the U.S. charts.


Ina Deter got the impetus for this song from the album “Welch in Land” (What a country)! – Was für Männer” by the group Extrabreit. The record cover on a poster had upset her so much that she wanted to give a tongue-in-cheek answer to this self-righteous statement. The song, released in 1982, didn’t make the charts until 1983 when it stayed for 14 weeks.

But there was also criticism. The public performed it as a militant message critical of society. Some radio stations boycotted the song, and there were several hate messages for Ina Deter.

The lyrics nevertheless made it into advertisements and newspaper headlines as a catchphrase.


With the charms of a woman, Tina Turner wants to convince in her song a man typical in her eyes. She begs for attention and a reaction from the lawyer, whom she asks to put the books aside and take off her tie.

This commercially again successful song Turner brought out in 1986. It was released as the first single from “Break Every Rule.” Among others, it reached number two in the United States.


In 1984 Bonnie Tyler went in search of a hero. Jim Steinmann and Dean Pitchford wrote part of the “Footloose” soundtrack.

One song line comes from Ubi sunt, and parts of “Stark Raving Love” by Jim Steinmann were sampled. In the lyrics, the protagonist desperately calls for a savior, and this scenario is spectacularly realized in the music video for the song.

Bonnie Tyler escapes from a burning house, and for the chorus, she stands on the Grand Canyon in a white dress. “Holding Out for a Hero” is not only used in “Footloose” but is also played in the series “Superman – The Adventures of Lois & Clark” or in the movie “Shrek 2”, among others.


How it feels to be in your mid-twenties. As a man, you are invincible, strong, and the breadwinner. Here’s how drummer Ronnie Vannucci explains the song’s content, which was released in 2017.

It describes the emotional state of the band members in their younger years the exuberance they felt. A week after its release, “The Man” was #26 on the Billboard Alternative Songs chart. The song is also featured in the 2018 video game EA Sports UFC 3.


With the song “I’m Still a Guy,” Paisley wanted to reflect the struggle between men and women in a playful way. In the song lyrics, the narrator clarifies that he is still a man, even if society would like to impose some feminine characteristics on men. His pregnant wife served as a rehearsal listener, as he was not sure if women would accept the song.

The rehearsal succeeded, and in March 2008, the title was at number 48 on the Hot Country Songs – Charts. Later he even led them for three weeks.


Son of a Preacher Man” is a single from the fifth studio album of the British singer Dusty Springfield. The song from 1968 made it into the best lists of various music magazines, and it developed into a real cult song.
Also recommend:   Soccer Anthems: 40 The Most Popular Soccer Songs Of All Time

As one of the soundtracks to “Pulp Fiction, the success of the song also belonged to a certain extent with number 21 in the US album charts, which took the album to the film. One of the numerous cover versions comes from the German singer Sarah Connor. In 2007, she released her song version about developing a love for a preacher’s son.

20. Gitte Haenning: “I want a cowboy for a husband”


This wish brought the Pop singer Their most successful hit, which is still on many parties to sing along and dance animated. Not the solid man, which mummy wishes as a son-in-law, it should be, but a cowboy, who can supposedly not only shoot well but also kiss well.

Initially, Haenning took third place at the German Schlager Festival in 1963 with the cheekily sung song, paving the way to the hit market. After its release in August 1963, “Ich will nen Cowboy als Mann” remained at number one for two months. By June 1965, over one million records had been sold.

These 68 songs about men are as diverse in musical style and content as men themselves. Sometimes rough and sometimes gentle, sometimes funny and sometimes severe. But each in his unique way reflects the various facets of a man.

65 Songs That Bring Good Mood Into Your Life

70s Party Songs: The Best Party Hits Of The Seventies