The 20 Best Friendship Movies Of All Time

Sharing Are you looking for a movie to watch together with your friends at the cozy get-together? Maybe even one in which you’ll find your own relationship with each other again? Hollywood has produced a … 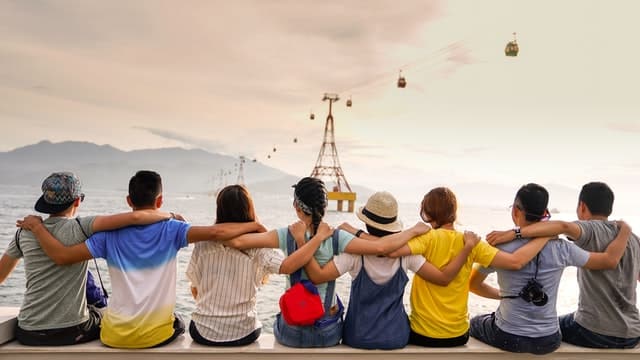 Are you looking for a movie to watch together with your friends at the cozy get-together? Maybe even one in which you’ll find your own relationship with each other again? Hollywood has produced a number of wonderful friendship films throughout history. All the films in this list are about very special, strange, profound or dramatic friendships. There will surely be a suitable film for your movie night!

Spoiler warning: The end of each film is revealed in the description.


This friendship movie is about twelve-year-old Mathilda’s unusual relationship with hitman Léon. The two live in the same house and clash during a drug bust. While corrupt police officers murder Mathilda’s parents, Léon protects the little girl.

Mathilda wants to avenge her brother, who was also killed and asks Léon to train her as a contract killer. In return, she takes care of Leon’s household and teaches him to read and write. Together, the unlikely pair get caught up in the turmoil of the drug mafia throughout the film. Léon must pay for this conflict with his life. Mathilda returns to her original life but keeps Léon’s memory alive.

The film was Natalie Portman’s breakthrough, earning her high praise for the difficult role of Mathilda at just 13 years old. To this day, the film is considered a great example of unusual friendship in even far-fetched scenarios.


No friendship movie shaped an entire generation quite like Breakfast Club. On a Saturday, five completely different students meet for detention at school. The nerd, the rebel, the athlete, the princess, and the outsider can’t do anything with each other at first; their life ideas are too different. The prejudices between teenagers are also initially major barriers.

In the course of the day, however, both joints and profound conversations lighten the mood. Slowly the teenagers realize that they are all quite similar behind the facade. Ultimately, they all suffer from the expectations of their environment and parents.

Both friendship and tender romance form towards the end of the day. But the film doesn’t reveal whether or not they make it through the weekend because it really only focuses on that one Saturday.


Thelma and Louise are two women who are struggling both professionally and privately. The friends decide to leave their lives behind for a weekend and move across the country one day.

The two women get into several dangerous situations in the following road movie. They encounter several men who become dangerous to them in various ways. At one point, Louise can only prevent Thelma from being raped by shooting the man. From now on, the two friends are on the run.

But the misfortune drags on… Although the whole world conspires against them, the friendship between the two remains strong until the end.


One of the probably darkest friendship films takes place in 1959 at an American elite school. English teacher John Keating, played by Robin Williams, is new at Welton Academy and soon attracts attention with unconventional methods. In the conservative environment of the elite school, he tries to encourage the students to think for themselves.

Some young men from Keating’s class form the Dead Poets Club. In secret, the friends meet to appreciate literary figures and their poetry. However, the club and Keating’s methods are met with resistance. When the father of one of the friends threatens to pull the son out of school to put him in a military academy, the son takes his own life.

Keating is blamed for the suicide of the student and is suspended from duty. The remaining students end up demonstrating not only friendship with each other but also that with their teacher, as they stand on their school desks in the now legendary scene and chant “O Captain! My Captain!” call.


Stand By Me is also set in 1959. The disappearance of a boy has been reported on the radio for days now. Twelve-year-old friends Gordie, Chris, Teddy, and Vern decide to go on their own to find the body.

On their quest, the four boys get closer and closer to each other in deep conversations. At the same time, a group of older teenagers also tries to locate the body. Both groups are found practically at the same time and argue about who was there first. In the end, they decide together to anonymously report the location to the police.

Stand by Me is another friendship movie from the 80s that has reached cult status today. River Phoenix, only 15, caught the attention of all of Hollywood with his impressive portrayal of Chris Chambers.


The film tells the life story of the mentally retarded but kind-hearted Forrest Gump. It is an eventful life that he looks back on. He meets three U.S. presidents, Elvis Presley and John Lennon, fights in the Vietnam War, becomes a professional ping-pong player, and starts his own shrimp empire.

But the film’s core is that Forrest has a number of good friends around him who have shaped his life. This includes his childhood sweetheart Jenny, his war buddy Bubba as well as
Lieutenant Dan Taylor. All three keep popping up in Forrest’s life and helping him along despite his intellectual difficulties. With Jenny, Forrest Gump even begets a son.

For his portrayal of the title character, Tom Hanks rightly won the Best Actor award at the 1995 Academy Awards for best leading actors.


Lindsay Lohan plays 16-year-old Cady, who grew up in Africa among many friends. Then her mother moves to the U.S. because of a job offer, and Cady has to attend public school for the first time.

There, Cady gets involved with a snarky clique of girls, and she becomes more and more addicted to the world of glitter and superficialities. As life goes on, however, she realizes the really important things in life and makes real friends with other students at her new school.


Step-siblings Sam and Patrick meet Charlie, who is new to their high school. After realizing that Charlie has no friends, they include him in their circle of friends.

It soon becomes apparent that all three friends are struggling with various childhood issues. Both Sam and Charlie were sexually abused as children. Through this common traumatic experience, the two come closer to each other.

This friendship film was produced by John Malkovich and was Emma Watson’s first major role after the Harry Potter films. The film helped her make the steps to adult, serious roles effortlessly.


Ten years after graduating from high school, 28-year-old Romy and Michele still haven’t decided what they want to do with their lives. One of them works as a waitress, the other one is unemployed, and it doesn’t really work out with men either. The friendship between the two young women is strong, however, as they still live together in a shared apartment.

When an invitation to a ten-year high school reunion arrives, Romy and Michele realize their lives are unlikely to impress their successful classmates. So they decide to rent an expensive car and pretend to be successful entrepreneurs. Even when the lie is exposed, Romy and Michele do not doubt their friendship. At the movie’s end, their dream even comes true as they open their own boutique together.


This French cult comedy already has friendship in its title. Wealthy but paraplegic, Philippe is looking for a new caregiver to make his daily life easier. Senegalese Driss swindles his way through life, showing up for a job interview only to get a stamp from the employment office. To his own surprise, however, he is hired, and a wonderful friendship develops between the two mismatched men.

What makes this friendship movie so special is the fact that friends can find each other even across all social classes and obstacles. The film is based on a true incident, making the story even more beautiful.


A popular motif for friendship films is relationships between two people in hostile camps. It is especially impressive in this film. It is about two eight-year-olds, Bruno and Schmuel, who are separated by a barbed wire fence because Bruno is the son of an SS Obersturmbannführer and Schmuel is a Jewish child in a labor camp.

The two friends meet again and again at the fence to exchange ideas and play games. If necessary, they also defy all rules and prohibitions. The film comes to a tragic end when Bruno sneaks into the camp to help Schmuel find his father. Incorrectly, Bruno is also considered an inmate by the guards.

The special feature of this film is the view of the atrocities of the Second World War through the eyes of a child. All the violence becomes even more inconceivable and harder to bear.


Clueless is a typical teenage comedy that shows the friendship between three girls at an American high school. Besides that, a lot of romance and intrigue happens.

But what makes the film so extraordinary is the fact that it is based on the Jane Austen novel “Emma” and sets the plot in modern times. Due to the great success of this film, a television series was produced in the following three years, showing the further lives of the characters.


Four teenage girls swear eternal friendship in the summer of 1970. They spent most of the summer together and became inseparable as a result. But the most exciting experience this year – similar to “Stand by me”- was searching for a missing boy who had died 25 years earlier.

In 1995, the now grown-up women met again on the occasion of an upcoming birth in their ranks and reminisced about old memories. Once again, they find each other and prove that friendship can be revived even after years of separation.


This friendship film has long reached cult status. Tells the special friendship of two young women in the 1930s who must overcome racial prejudice above all else. In the course of the film, it becomes clear that the friendship between the women has become a tender romance. Because such a lesbian love affair was not allowed in those days, the two loose sight of each other, and one of them even married a man.

After meeting again, unfortunately, the happiness does not last long because one of the women dies much too early of cancer. The title refers to the fried green tomatoes the two friends offer their guests in their common café.


This friendship movie with Morgan Freeman and Jack Nicholson proves that good friends can be found even in the last years of life. Both play elderly gentlemen with cancer and meet each other in the hospital. For both of them, the prognosis looks extremely bad.

The two friends make what they call the “spoon list” – a list of things they want to get done before they kick the bucket. On a delightful road trip, the two older gentlemen work their way through their list. In the end, it turns out that this particular friendship is also meant to last into death.

As you can see, there are plenty of great friendship movies you can watch together. Whether you want to laugh or cry together, you’re sure to find the right film to toast your friendship on this list.

The 25 Best Prison Movies Of All Time

The 50 Best Kids Movies Of All Time