Music to Get Up: 103 Good Morning Songs

Table of Contents The best songs to wake up to:1. The Beatles – Good Morning, Good Morning2. The Wailers – Get up, stand up3. Seeed – Aufstehn4. David Dundas – Jeans on5. Mötley Crüe – … 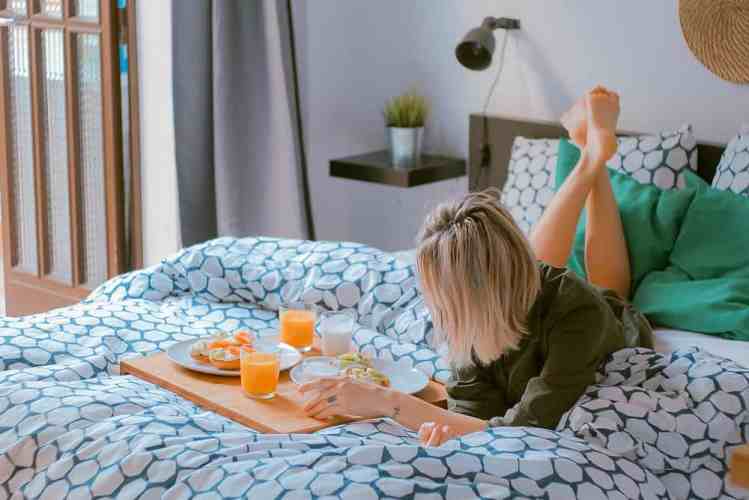 Getting out of bed in the morning is torture for many, and a bad mood is already pre-programmed when the monotonous alarm hammers on the eardrums. But if you get up with the right song, you’ll start the day on a positive note.

A hearty breakfast is crucial for a positive mood in the morning.

The soundtrack in the early morning hours wants to be chosen with care. Three crucial points every good morning song should have:

You will find a new alarm tone with the following playlist of the “100 best songs to get up for”. Besides soft music to wake up to, we have also selected songs that have a fast-paced beat. With this, everyone should get their money’s worth and start the day happily!

The best songs to wake up to:


Every day starts a little bit better when the probably most influential band of all times good morning: The Beatles recorded this song on their legendary “Sgt. Pepper’s Lonely Hearts Club Band” album from 1967, with John Lennon as the main person responsible.

The powerful wind instruments actively help you wake up and complement various sound samples – of course, the crowing rooster can’t be missing here. The inspiration behind the song couldn’t be more morning-like, either, as Lennon’s creative spark came after seeing a T.V. commercial for cereal.


Of course, this 1973 number wasn’t originally intended to help people get up in the morning: deeply moved by the poor living conditions in Haiti, Bob Marley wrote the song together with Peter Tosh instead as an uplifting recommendation for action to the people there. However, the title can just as well be taken literally and used to start a new day with an extra dose of motivation to create a new day – exceptionally when a challenge awaits!

Get up, stand up” also has historical significance, as it was the last song Marley, who died in 1981, ever played live.


Pretty self-explanatory, isn’t it? The bass-joyful ensemble has released this track as the first harbinger of their third album “Next!” published in 2005.

Seeed relied on the help of several fellow musicians, from whom we should hear later in other ways – so besides Cee Lo Green, who later became famous for Gnarls Barkley, Miss Platnum was also involved as a background singer. In a pleasantly discreet way, the troupe from the fat B encourages you to stop sleeping away from your life and take advantage of a sunny day instead. Best dancing!


The optional intermediate steps are likely to vary a bit in each household, but at some point, getting up is usually followed by getting dressed. It’s no different for David Dundas, as he recounts his 1977 hit “Jeans on.” As soon as he slips into his favorite pair of pants in the glow of the morning light, all is right with the world for him again!

His song, which was actually composed for a TV commercial for the jeans brand Brutus, was released as a single with a modified, slightly less promotional lyric. Dundas gave it a № 1 ranking in the German charts; listeners to this day a guaranteed Earworm.


It is a clear principle in the morning for many people: If you want to wake up, you need coffee! Some days require shifting into higher gear right after waking up – an extra sugar cube is a quick fix there. Although the daredevils of Mötley Crüe used quite different means for this purpose in the wild eighties, their glam metal classic “Kickstart my Heart” works wonders even with an extra-strong cup of the dark elixir of life.

This acoustic energy boost is guaranteed to get the pump primed!


Of course, we are not the first ones who would like to help you with musical recommendations to get up. In the course of the obligatory research for the own playlist, this song has appeared in almost every listing of the dear colleagues – and we don’t want to withhold it from you either!

After all, the soul number sung by Bill Withers in 1977 offers four minutes of lightheartedness set to music, which should make for a light-footed and optimistic morning. Also not to be sneezed at is the over 18-second long note at the end of the song, with which Withers was the undisputed record holder in the English charts for a long time.


The quasi-title track of the second Oasis album “(What’s the Story?) Morning Glory” certainly appears in this list not only because it alludes to the early hours of the day: While the intro together with its auspiciously howling guitars initially leaves a few bars to leisurely open your eyes, the number then goes forward unchecked and inevitably wakes up. The rocking Noel Gallagher composition bristles with the highly healthy self-confidence for which the two brothers at the band’s helm were famous and infamous at the time.

If you want to get up with a similarly broad chest, you can count on the infectious effect of this song!


A smile that’s as bombproof as his gel hairdo, flashy colors, and a pronounced tendency towards kitsch set to music: Alexander Marcus has been polarizing fans since 2008 with his “Electrolore” style of music, which has already provided fans with several of his inimitable cult hits on his eponymous debut album. Like so many of their songs, “Guten Morgen” wavers between idyll and bizarreness but is nevertheless (or maybe because of that) suitable for a smooth and danceable start into the day.

The song is also legendary on the campgrounds of various festivals, where it is often used around sunrise for continuous sound reinforcement of the campers.


Hachja, the morning on Sunday: Children are happy about an early T.V. session, while adults usually appreciate it as a well-deserved chance to relax. Faith No More provides the perfect soundtrack with their ” Easy ” version recorded in 1992!

The maximally relaxed basic mood of the relatively faithful Performeration and a soulful guitar solo arouse downright heavenly associations. The Commodores were already successful in the seventies with this song written by Lionel Richie. Still, the cover of the alternative metal group made it known to a wider audience.


What waking up is to man, booting up is to the computer – so it seems obvious that Microsoft once spent a lot of money to let “Start me up” sound in the commercial for the then-new operating system Windows 95. The simple rock number originally appeared on the 1981 album “Tattoo You” and gave the Rolling Stones their last place in the British Top Ten.

The song has not lost its driving effect until today, which is why it has been used again and again as an opener at concerts since then. And what works to fire up tens of thousands instantly can only be good and right in front of the bathroom mirror in the morning!

Trendy in the morning is, of course, a good mood song. Although we have listed quite a few positive songs, you might also like our Good mood playlist.

The 100 Best Dance Songs Of All Time

The 98 Best Rap Songs Of All Time