The 100 Best Blues Songs Of All Time 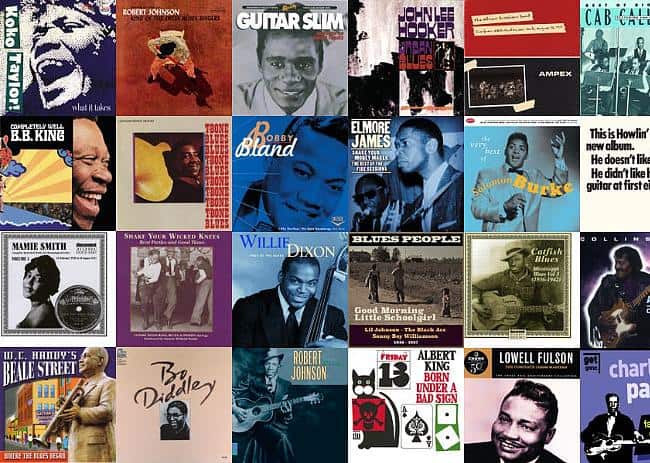 Blues: A style of music derived from the English word “blue,” which means sad. The lyrics are about longing, pain, sorrow, and love, and all are predominantly packed in melancholic and dreamy sounds. Started by enslaved African-Аmericans who wanted to make their monotonous work more bearable, a music genre emerged that produced great songs.

The 100 following titles belong to the best blues songs of all time.


BB King provided probably the best-known version of the title, which is based on a Broadway musical of the same name. The song is about a failed love, a spell that has finally faded away.

For the background, King used strings and landed on the 3 in 1969. Ranked number one on the R&B charts. He also won a Grammy Award in 1970 in the category of best male R&B vocal performance. The blues version of “The Thrill Is Gone” was subsequently recorded by other artists such as Little Milton and Aretha Franklin.


The song from 1936 is related to a legend about a Blues musician who sells his soul to the devil to learn the blues. The song consists of five verses, in which the first-person narrator variously laments his suffering. This is how he begs God for mercy or laments being stranded in misery.

In 1986, the song theme was used in the movie “Crossroads – Pact with the Devil” and later also appeared in the mystery series “Supernatural”. Awards Cross Road Blues has won include the Grammy Hall of Fame.


Described by music critic Mike Rowe as a Party song in urban style, “Wang Dand Doodle” comes with an exciting beat. The blues song was written by Willie Dixon and reached #13 on the Billboard R&B charts in Koko Taylor’s version. According to Dixon, the meaning of the lyrics is to have a good time, dance a lot, and the song goes to an old Love song back.

Koko’s Performeration even made it into the Blues Foundation Hall of Fame in 1995.


“(Call it) Stormy Monday” is a West Coast blues-style song. Walker’s distinctive guitar work and plaintive, mellow voice made the number his best-known blues song. In 1948, the slow twelve-bar blues became a record hit, and in 1961, Bobby “Blue” Bland made it even more famous. However, he mistakenly used “Stormy Monday, ” so songwriters other than Walker received royalties.

Many other artists, not only from the blues scene, Performed the song. In addition, he finds himself among others in the Grammy Hall of Fame again. Only titles that are of lasting historical or qualitative significance make it here.

5. Bessie Smith: “Nobody Knows You When You’re Down and Out”


In the blues genre, the song from the pen of Jimmy Cox has long been a standard. The ballad was first recorded in 1927, then gained great popularity in 1929 through Bessie Smith.

The version with Pianist Clarence Williams and his orchestra can be heard on the B-side of their single “Take it Right Back.” Through this Performeration with stretched melody, the song was no longer assigned to the Schlager direction but found itself in the Blues. The song, about the deep fall in life and false friendships, has been covered over 200 times, and among them was also once very successful by Eric Clapton.

The release in Argentina reached number 8 in the singles charts there in 1992 and was even awarded the Golden Record in 1994.


The blues title “I’m Tore Down” is mostly associated with Freddie King. He released the single in 1961, but Sonny Thompson was credited as the author.

It’s about big feelings and brokenness. In 1994, the song hit #5 on Billboard’s Mainstream Rock Songs chart in a Cover version by Eric Clapton. The song appeared on his studio album “From the Cradle” and could hold his placement whole 13 weeks.


Next to “Sweet Home Chicago, “Dust My Broom” is one of the most covered blues compositions. The original recording was made by Robert Johnson in November 1936.

Whether the authorship lies with Elmore James or Robert Johnson is still being discussed. James’ version achieved surprising success in 1951, entering the national rhythm-and-blues charts. “Dust My Broom” served Elmore James a few more times as the basis for other songs. His song version can be found in the Grammy Hall of Fame.


There are seven years between the creation of the blues song in 1961 and its release. The song’s lyrics are about a prisoner who has a ball chained around his ankle and thus cannot escape adverse circumstances. With “Ball and Chain,” Thornton wants to draw attention to oppression in marriage.


One of the best-selling blues songs of 1954, “The Things That I Used to Do,” was released in 1953. It’s about abandonment, and it’s about things the protagonist will never do again.

Initially thought to appeal to rural folk in the southern U.S., the song became a national success by airing on radio stations in the north. Later, Guitar Slim played the music at places like the Apollo Theatre in New York City. The song stayed on the Billboard charts for 42 weeks, was number one for several weeks, and was the best-selling R&B record of the year, selling over a million copies.


In May 1962, Hooker released the single and quickly entered the Billboard Hot 100. The lyrics were written during a long engagement in a bar in Detroit. According to Hooker’s account, he was always late for gigs, and then the bartender would say, “Boom, boom,” and alert him that he was late again.

He quickly made a song out of this anecdote, played it on the spot and the audience was enthusiastic. When Advertising song for Lee Jeans resurfaced 30 years after its release and again landed chart successes.


An instrumental piece from Soul music, which became a million-seller. In 1962, the instrumental band Booker T. & deer M.G.’s actually hired as a studio band for singer Billy Lee Riley.

When this did not appear, the musicians used the time for their recording. A riff was developed and refined. In the end, the song is known today as “Green Onions” came out.

The track is dominated by a rather unusual 2/4 time signature and is often used on TV, movies, and radio. “Rolling Stone” music magazine included it in its list of the 500 greatest songs of all time, and in 1999 it won a Grammy Hall of Fame Award.


The guitar playing of “Farther Up the Road” represents the transition from the blues style of the 1940s to the blues-rock of the 1960s. Bland made the song one of his big hits with his deep voice and melodic vocals.

So there was a number one success and number 43 in the Billboard Hot 100.


The song spent five weeks on the Billboard R&B charts. “Mannish Boy” is a blues standard and was released in 1955. It’s the answer to Bo Diddley’s “I’m a Man”.

Throughout his career, Muddy Waters recorded various versions of the track about “being a man.” In 1986, the song was inducted into the Blues Hall of Fame, and in 2004, “Mannish Boy” made it to number 229 on Rolling Stone magazine’s 500 Greatest Hits of All Time. Paul Butterfield, as well as Jimmi Hendrix, also recorded cover versions.

Also as Movie soundtrack of “Good Fellas” and “Risky Business.”


Originally the title was written by the Sparks Brothers and published in 1935. But only BB King made it a blues classic with his version from 1954. When released in December 1954, the song about worry, trouble, and lack of love rose to #8 on the Rhythm & Blues charts.

Immediately, high record sales were recorded, which grew to more than 4 million copies sold over time. “Every Day I Have the Blues” is thus the best-selling blues song of all time.


Due to many cover versions, “Evil” became a blues standard. Willie Dixon wrote the lyrics about bad things in the house when the man is traveling. This probably means the subject of adultery.

In 1954 Howlin’ Wolf released the single and put the song on his album “Moanin’ in the Moonlight,” released in 1959. In 1969 “Evil” helped him succeed, and Wolf recorded another version for the album “The Howlin’ Wolf Album.”

It was his last single on the charts.


The song became especially famous for its scat choruses, in which Calloway included his audience. At times they became so fast-paced and complex that people could not repeat them, but started laughing.

The lyrics are mainly about the serious subject of drugs. In 1929 the song was recorded for the first time. ” Minnie ” ‘s catchword appears in several subsequent songs such as “Minnie the Moocher’s Wedding Day.” The music was also used in TV series and movies.

Calloway performed the song again in 1980 for “Blues Brothers.” In the meantime, there are many cover versions of “Minnie the Moocher,” among them also famous Performerations by Roy Fox and his Swingerband or Götz Assmann.

17. Solomon Burke: “Everybody Needs Somebody to Love”


The original version, which was recorded by Solomon Burke in 1964, was rather modestly successful. Burke delivered the track in a preacher’s style calling for people to witness the power of love. The song could only stay in the charts for 8 weeks and did not even reach the Top 50.

Wilson Pickett was more successful with his version and number 19 in the R&B charts. Covers by Dusty Springfield and the Rolling Stones followed. In 1980 “Everybody Needs Somebody to Love” was pushed once again by being part of the “Blues Brothers” soundtrack.

Finally, Rolling Stone magazine counts the track among the 500 greatest songs of all time.


This Piedmont blues was penned by Blind Willie McTell, who released the song in January 1929. The song’s title is about the city of Statesboro, Georgia. It tells the story of a man who begs a woman to let him into her house and of an inexplicable state of emotion.

In 1971, The Allmann Brothers Band re-recorded the song as a cover version, securing 9th place in the 100 Greatest Guitar Songs of All Time list published by Rolling Stone magazine.


Little Walter’s harmonica piece is often called the national anthem of the blues harmonica. The title was published under Little Walter & His Night Cats.

The great success caused Walter to leave the band while still on tour and form his band. “Juke” stayed at #1 on the Rhythm and Blues chart for 8 out of a total of 20 weeks. Still, today it belongs to the blues harmonica standards. Supposedly every blues harp player in Chicago has to perform the song in their version as a maturity exam.

2008 saw his induction into the Grammy Hall of Fame.


Bo Diddley sang the first version of Willie Dixon’s blues song. It is also the most famous recording and dates back to 1962. The release brought Diddley one of his previous chart successes.

The lyrics are based on the English phrase “don’t judge a book by its cover,” meaning that you shouldn’t rush to judgment based on appearances alone. In the song, the phrase is associated with several things. For example, it means that you can’t judge honey by looking at the bee.

Ultimately, the protagonist looks like a farmer but sees himself as a lover.

In this Top 100 list, blues fans are sure to have discovered one or two songs among their favorites. But maybe there was also a song that is only now becoming one of the favorites.

The Best Operas: Top 60 Most Popular Opera Arias Of All Time

153 Songs To Say Goodbye: Farewell Songs For Every Occasion