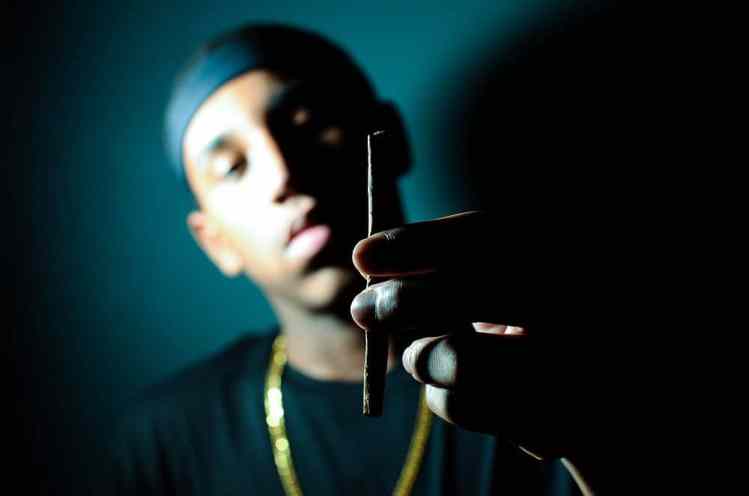 In the history of music, every topic is discussed extensively. So it is not uncommon for musicians to broach the subject of drugs. Music history is deeply rooted in narcotics of all kinds: marijuana, cocaine, LSD and a whole host of other narcotics are often the focus of a song.

Of course, drug references in music are nothing new, but in the past, it was only talked about behind closed doors. Rock songs like Jefferson Airplane’s “White Rabbit” and Pink Floyd’s “Comfortably Numb” made drug songs popular in the mainstream. Just the most successful rock singer of all time more or less everyone was on drugs and loved all kinds of mind-expanding substances.

In addition to classic rock songs on the subject of “drugs”, our playlist includes current pop songs such as “We Can’t Stop” by Miley Cyrus, “Diamonds” by Rihanna, or “Addiction” by “Kanye West”.

For all German-speaking fans we have of course also compiled a playlist. The best German drug songs include “Ganz Wien” by Falco, “Tag Am Meer Die” by the Fantastischen Vier and “Mehr Davon” by the Toten Hosen. You can listen to a total of 28 drug songs in German in our second playlist below.

The best drug songs of all time:


The British new wave and the post-punk band released “True Faith”, a song that was controversially debated. Fans and music lovers rate the lyrics differently.

Satisfying an addiction through consumption is considered the most likely Performeration of the lyrics. Although “True Faith” didn’t match the success of “Blue Monday,” “True Faith” reached a Top 10 ranking in the U.K. and Germany.

2. Falco – “Mother The Man With The Coke Is There”


Eccentric Austrian Falco, who died in a car accident in the Caribbean in 1998, landed a surprise hit with “Mother The Man With The Coke Is There”. Stylistically Falco went new ways with this song and oriented to the genre Dancefloor.

Falco plays almost subtly with the term coke as a synonym for cocaine and coal. The song is based on a popular song in Berlin at the end of the 19th century. Century. “Mutter Der Mann Mit Dem Koks Ist Da” is understood by fans as a kind of life confession since Falco himself suffered from addiction disease.

Commercially Falco could not follow up on early successes. The song reached number 11 in the German charts.


With over 150 million records, Aerosmith is one of the most successful rock bands of all time. The song “Combination”, composed by Joe Perry in 1976, appeared on the album “Rocks” and is one of the most famous songs associated with addiction. A release as a single did not take place. “Combination” and the album “Rocks” are musical to be assigned to the heavy metal area.

Blues rock elements of past songs are not to be found.


The album of the same name was recorded at Sweet Silence Studios in Copenhagen in 1985. The band succeeded with “Master Of Puppets” to draw a bow between the master of puppets and the subject of drug addiction.

Drugged out of control, life changes dramatically. Nothing is as it was. Produced by Flemming Rasmussen “Master Of Puppets” comes to a total length of 08:38 minutes.

With rank 31 in the German charts, the band could lay a milestone for later successes. In the fall of 1986, guitarist Cliff Burton died in a traffic accident while the band was promoting the album “Master Of Puppets”.


Marianne Faithfull, a Singer of the 1960s and friend of Mick Jagger is considered the namesake of the song released in 1971. Faithfull, herself heavily addicted to drugs, was literally passed around among the band members of the Rolling Stones. She was the girlfriend of Mick Jagger and the mistress of Brian Jones and Keith Richards.


The co-founder of the band The Beatles suffered from heroin addiction from the late 1960s to the early 1970s. Together with his wife Yoko Ono he underwent a cold turkey withdrawal. Lennon processed the drastic experiences of his addiction and withdrawal and released the song in October 1969 for his Plastic Ono Band.

In the legendary Abbey Road Studios, Lennon first recorded a version with Eric Clapton and Ringo Starr. However, the final recording took place at Trident Studios. “Cold Turkey” reached its highest position in the British charts with number 14.


It is the most famous German song about drugs. “On the day Conny Kramer died” is the German cover version of the US song “The Night They Drove Old Dixie Down”. In 1972, only 15-year-old Juliane Werding published the German version. Lyricist Hans-Ulrich Weigel took the addiction and actual drug death of a friend of Juliane Werding as a basis.

The song hit the nerve of the audience and reached number 1 in the German charts.


Born in 1969 under her civil name Marta Marrero, the singer had her first and only hit with “Toy Soldiers” in 1989. The theme was the cocaine addiction of a friend of Michael Jay, who wrote the song together with Martika. The physical and mental decay is in the foreground of the title.

In the USA “Toy Soldiers” made it to the top of the charts. Three months later, in August 1989, the track reached #5 in the German charts.


The indie-pop band, founded in 1999 in Cologne by Klaus Cornfield, originally composed the song “Das Geld, der Ruhm und die Mädchen” in English under the name “The Girl, the Fame and the Money”. The song was popularized by the hit movie Feuchtgebiete (Wetlands), in which the title can be heard. She takes ecstasy and cocaine.

With these words begins the appealing number, which appeared in 2005 on the album “Von Hinten”, but remained largely unnoticed.


With “Alcohol” in 1984, Herbert Grönemeyer succeeded in creating a title that goes far beyond the subject of alcohol. While various groups consume cocaine, Valium, speed, and marijuana during the day, they turn to alcohol in the evening.

The popular song is firmly part of the Göttingen-born artist’s repertoire. “Alcohol” was released as a single from the successful album “4630 Bochum” and reached number 33 in the German charts.

We probably don’t need to tell you that using drugs is a bad idea. Countless musicians died as a result of drug abuse! Also, read our post on this topic: “Drug deaths: these 15 pop stars died from overdoses” by.