Edm Party: 108 The Most Popular Electronic Dance Music Songs Of All Time 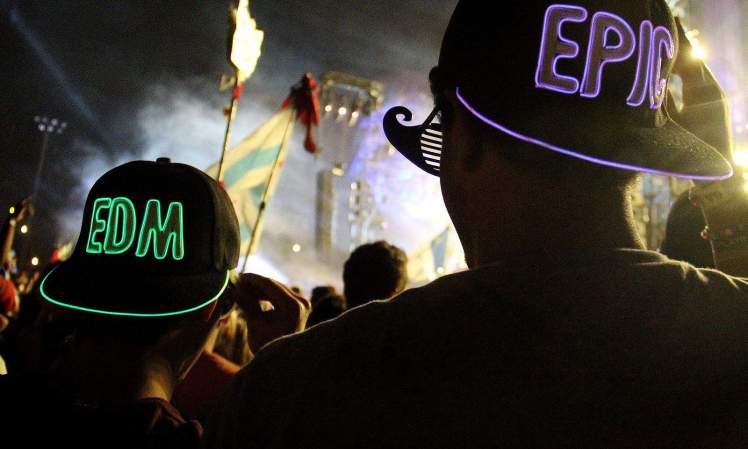 Electronic Dance Music (EDM). Electronic dance music is a relatively new term under which all genres of house, drum & bass, garage, techno, minimal techno, electro, and disco are summarized. In the meantime, EDM songs can be heard at every decent party, and it’s hard to imagine the singles charts without them. Electronic Dance Music has become more and more an essential part of pop music in the last few years.

Our playlist includes the most popular and commercially successful EDM songs of the last 30 years.

(At the end of the article, we have put together a Spotify playlist for you with all the songs listed here.)


The first place on our list goes to the party anthem “Don’t You Worry Child” by Swedish House Mafia. This hit is a piece of music that everyone who has turned on the radio in the last few years has heard before.

In Great Britain and Sweden, the guys from the Swedish House Mafia reached number 1 in the charts. In Germany, they won gold three times. “Don’t You Worry Child” is, for the time being, the last single of the Swedish trio, who performed the song for the first time in Milton Keynes, England, more than 60 years ago.


We award the silver medal in our list of the best EDM songs to Armin van Buuren’s top hit “Shivers.” This soulful and melancholy piece of music sends a shiver down our spine before sending us to the dance floor after an epic drop to let it all out for once.

Armin van Buuren wrote parts of the lyrics for this song himself and had them sung by singer Susana. Van Buuren himself calls “Shivers” an important and big step in his musical development. We can only agree.


The song “Sandstorm” by Finnish DJ and producer Darude is one of those pieces of music that everyone, willingly or not, has heard before. Since its release in 1999, “Sandstorm” has become an absolute dance and techno hit and is a guarantee at festivals, clubs, and parties all over the world for good mood. Although the song is one of the classics today, the chart positions were never as massive as other hits on our list.

We therefore honor “Sandstorm” with a great 3rd place on our list of the best EDM hits of all time.


The combination of Florence Welch’s unique voice with the beats of star producer Calvin Harris makes Sweet Nothing a hit at every party. The catchy lyrics together with the driving music give this song its potential to dance to and Sing along. The track was first released on the album “18 Months”, for which Calvin Harris even received a Grammy and stayed on the charts worldwide for months.

Meanwhile, the song has been reused in remixes by many other well-known artists, such as Diplo and star DJ Tiesto.


“Turn Down For What” is our number 5 greatest EDM hit of all time. For his breakthrough in the party and electronic scene, the musician Lil Jon, who is normally known for his southern raps, got DJ Snake on board as a producer and conquered the charts and the internet, almost by the way. Also because, or even though, the lyrics consist of only 2 phrases shouted by Lil Jon, “Turn Down For What” is an absolute hit at every party.

And not only do we love this song, in the USA, Jon And Snake got six times platinum with it so far and brought the phrase “Turn Down For What” on everyone’s lips.


“Levels,” also known as “LE7ELS”, is the most successful song by Swedish star DJ Avicii and automatically triggers summer feelings in any listener. The lyrics are simple yet moving and are pushed forward by a progressive house beat. Etta James, an American singer, sings the song.

Both Avicci and James are already deceased. The song “Levels” both have created work for eternity, which stormed the charts in many countries and doubled in Germany. We say, “I got a feeling, yeah..”.


On position 7, we meet again David Guetta, whom we already know from another hit from our list of the greatest EDM hits of all time. As with “When Love Takes Over,” Guetta also enlists a world-class singer for “Titanium,” in this case Australian Sia.

Drawn by Sia’s stunning vocal performance and Guetta’s signature driving beats, “Titanium” reached #1 on the singles chart in the UK, and in Germany, the hit rose to #5. The success is hardly surprising since the French star DJ and other greats such as Giorgio Tuinfort and Afrojack worked on the song.


The song was already a massive hit in the dance scene, even before Kanye West and Jay-Z sampled it in their hit “Who Gon Stop Me.” The song was the breakthrough for the English DJ and producer Flux Pavilion, whose real name is Joshua Steele. “I Can’t Stop” is characterized by straightforward lyrics supported by a stomping beat and encourage passionate dancing and moving.


9th place on our list of the best EDM songs of all time is occupied by our favorite track by Dutch star DJ Tiesto. For the song “Adagio For Strings,” he covered the original song by Samuel Barber. With such great success, he was even invited to the opening ceremony of the 2004 Olympic Games.

The mix of classic melodies and a driving Ibiza-style beat will set the mood at any party. The music magazine Mixmag declared “Adagio For Strings” the second-best dance song of all time. For us more than enough reason to include him in our Top 10!


Love it or hate it: hardly any EDM track has divided minds as much as Martin Garrix’s “Animals.” This is mainly due to the song’s massive success because, for months, it was impossible not to hear it somewhere at least once a day. The instrumental of “Animals” is as catchy as it is danceable and thus should not be missing at any party; the melody has 100% Earworm quality.

Even though Martin Garrix says he can’t listen to “Animals” anymore, it has earned its place 10 on our list.


With “Strobe,” the Canadian producer and musician Deadmau5 landed probably his biggest hit so far. First released on Deadmau5’s studio album “For Lack Of A Better Name,” the initially tranquil, almost worn, song took the dance world by storm. The slow beginning is followed by a steadily rising beat, on which more and more soundtracks and melody lines build up, giving the song its flow without letting the feelings from the beginning of “Strobe” fade into the background.

At just over 10 minutes long, “Strobe” is one of the longer hits on our list, and every second of listening is worth it.


Revisiting our already familiar motif of graceful female vocals on a driving beat from a star producer, we give you Armin van Buuren and Emma Hewitt as number 12 on our list with “Forever is Ours.” Drawn by emotion, an almost unbearable fade, and a subsequent epic drop, it’s impossible not to hit the dance floor halfway through the song at the latest.

Armin van Buuren, the king of trance, started producing music at 14 and is now a regular headliner at major festivals.


The next song on the list of our greatest EDM hits of all time also brings a whole new subgenre with it. With its dissonant tones and noises, seemingly randomly crafted onto a relentlessly advancing beat, producer Skrillex landed an absolute hit and paved the way for dubstep into the mainstream.

However, the track is surprisingly danceable and has absolute recognition value. And we are not the only ones who like “Bangarang” in Australia; the song even reached platinum status. Today producer Skrillex belongs to the most successful DJs and regularly tours worldwide.


Number 14 on our list is taken by the hit “Faded” by Norwegian DJ and producer Alan Walker, a song unsurpassed in feeling and recognition potential. Everybody who has turned on the radio in the last years has heard “Faded” and rightly so because, with positions 1 and 60 weeks in the German single charts, this song is an absolute hit.

This song is especially appreciated at parties for its sing-along qualities and is guaranteed to bring the mood to a boil.


This song is so catchy that it doesn’t need an introduction anymore. With one of the most addictive songs ever, Major Lazer and Snake took the charts by storm and stayed in the German single charts for 68 weeks.

The official music video has already reached more than 2 billion clicks on YouTube and thus plays in the league of the big ones. The song’s huge success is certainly due to its motion because everyone knows what to do when it says: “All We Need Is Somebody To Lean On.”


“Spaceman” is probably the track that got the career of star producer Hardwell rolling. Its catchy melody paired with Hardwell’s signature epic drops makes it impossible not to dance to “Spaceman.” During the 2012 and 2013 festival seasons, the song was omnipresent and contributed significantly to the success of the “I AM HARDWELL” tour.

Even without lyrics, the producer manages to transmit feelings in this song, and who said you could not sing along without lyrics?


Known from the ultimate Party Movie “Project X,” The remixed version of Kid Cudi’s “Pursuit of Happiness” by star producer Steve Aoki is a regular on every EDM hit list. Anyone who has heard the song live or in a club can tell you the huge dance potential.

And even people who think they have never heard the song can sing along with the lyrics after a short time.


The name is a program. Of all of producer Daft Punk’s countless hits, “Harder, Better, Faster, Stronger” is arguably the one with the most addictive potential. Even though this song doesn’t fit into the typical EDM and techno soundscape, it’s the creativity and unconventionality of Daft Punk that inspires us so much.

And not only us – countless artists have been inspired by the style of the French artist collective, founded in 1993. We like!


Also, in our number 19, the beats are completed by the voice of a star singer. In this case, the song was produced by French star DJ David Guetta and completed by the beautiful voice of Kelly Rowland. According to her statements, the singer had to cry after hearing the instrumental version of the song for the first time; after that, she agreed to collaborate with Guetta.

She also wrote the lyrics for “When Love Takes Over.” The song stayed for 36 weeks in the german single charts, so it’s no wonder that this is an absolute party hit.


This song is not only one of the biggest EDM hits but one of the biggest hits ever. Even though you might not immediately recognize the track’s name, there’s probably no one who hasn’t heard “Children” before. Its distinctive melody line paired with the whipping bass makes it a favorite of the masses and ensures a dance guarantee.

Released in 1996, the song has been played up and down in techno clubs worldwide ever since. Robert Miles’ biggest hit, “Children,” charted at #1 in 12 countries, more than enough for us to include it in the list of greatest EDM hits of all time.

We hope you enjoyed our list of the greatest EDM hits of all time, and maybe we could make you aware of some great music you didn’t know about before. Thanks for stopping by and Dance On!

The 100 Best Techno Songs Of All Time