The 100 Most Popular Grunge Songs Of All Time 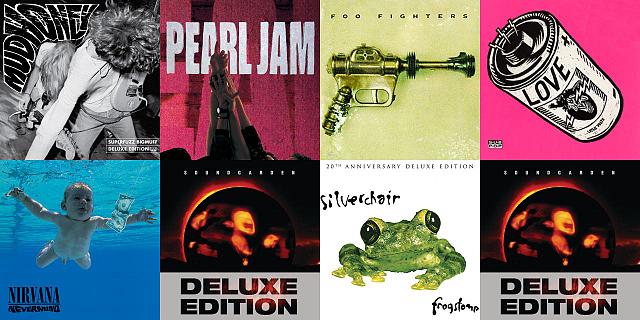 Gruff guitar sounds, distorted almost beyond recognition, rough drums, and lead singers screaming out their world-weariness – the grunge music of the 90s is not just a music genre. Kurt Cobain, Eddie Vedder, and Co. created the soundtrack of Generation X with their songs and laid the foundation for the alternative rock and nu-metal of the following two decades. In worn-out, holey clothes and with the shit-legal attitude of punk, they conquered the world’s stages and put an end to the over-produced plastic sound of the 80s.

(A Spotify playlist can be found at the end of the article.)


The entire grunge genre would not be what it is today without “Smells Like Teen Spirit.” In 1991 the first single from “Nirvana’s” most successful album “Nevermind” became the anthem of a whole generation. What began in cramped rehearsal rooms and dark bars in Seattle developed into a worldwide phenomenon and made Kurt Cobain, Krist Novoselic, and Dave Grohl immortal icons of their time.

Even today, the song resounds on the dance floors and in the concert halls of the world. Cobain’s angry vocals about the disorientation, fear, and apathy of youth never seem to go away. “Smells Like Teen Spirit” may not be the best grunge song of all time, but its relevance is unmatched.


Pearl Jam is one of the few bands that survived the wild 90s and still releases albums and performs today. The debut album “Ten,” released in 1991, is considered by many connoisseurs as the artistic highlight and the formation around Eddie Vedder as the secret kings of grunge – even before “Nirvana.”

“Alive” is about holding your ground while everything around you is falling apart – about loss and new beginnings – as if Vedder knew back in the early ’90s that he would one day be one of the last of his kind and still be on stage. His signature wailing vocals and Mike McCready’s legendary solo make “Alive” one of grunge’s most moving and, above all, best-known anthems to this day.


At the beginning of the grunge hype, the band “Soundgarden” around frontman Chris Cornell was somewhat overshadowed by other groups from Seattle. That changed abruptly in 1994 with the number one album “Superunknown.” The song “Black Hole Sun” became the most successful release and is still one of the most influential grunge songs today.

Cornell’s depressive lyrics, carried by his unmistakable, rough voice and the unorthodox lead guitar of Kim Thayils, set new standards and make the song a frequently played hit until today. But it’s also true that the commercially very successful “Superunkown” marks for many not only the peak but also the end of the grunge era.


The song “Touch Me I’m Sick” from “Mudhoney’s” first album “Superfuzz Bigmuff” can be considered as the first relatively successful song of grunge and set the cornerstones of the new sound. The band bridged the gap between punk and rock, offering for the first time a natural alternative to the hair metal of the 80s, which was becoming more and more pathetic, imposing, and overproduced. “I feel bad, and I’ve felt worse, I’m a creep, yeah I’m a jerk,” sings Mark Arm in the first verse, putting the message of grunge in a nutshell for the first time in an almost prophetic way.
Also recommend:   Summer Songs: 100 The Most Popular Summer Hits Of All Time


When “Kool Thing” appeared on Sonic Youth’s new album “Goo” in 1990, the band had already been established for a decade – but not in the grunge genre. As the most essential band of noise rock and no-wave, the group around Kim Gordon had paved the way for groups like “Nirvana” and “Pearl Jam” and radically pushed the boundaries of what was musically possible.

In 1990, the New Yorkers again jumped on the grunge wave and created one of their most popular tracks with “Kool Thing”, which was clearly oriented towards the dirty, new Seattle sound.


With their second album, “Purple,” “Stone Temple Pilot” reached as one of the few bands of the grunge era number one in the U.S. album charts and thus became one of the most commercially successful grunge formations ever. More importantly, with this album, the band stepped out of the shadow of their great idols of Pearl Jam and developed their sound. However, this did not change that the group is still one of today’s most hated grunge bands.

The aggressive song “Vasoline” stands exemplary for the development of the group. The verses are carried by a riff consisting of only two notes, while the chorus is very melodic and overproduced for a grunge track – a matter of taste, but successful in any case.


“Come as you are” was released as the second song from the most successful grunge album of all times, “Nevermind” by Nirvana, and still enjoys absolute cult status today. Many grunge connoisseurs will be bothered by the fact that there are two songs, in the eyes of many overrated bands, Nirvana listed among the ten most essential tracks of the era. But the truth is The catchy bass line of “Come as you are” is one of the first finger exercises that many people learn learning Guitarists for three decades.

The single sold a quarter of a million copies in 1991 and has since resounded through the children’s rooms of the 14-year-olds of this world – absolute cult.


Alice in Chains was one of the first bands from Seattle to celebrate commercial success and fill halls with their music. The “Man in the Box” video was the starting signal for this.

After MTV played the track in a continuous loop, many radio stations also included the song in their program. In the song, the band metaphorically criticizes media censorship in the U.S. using the example of a person locked in a cage.


The “Melvins” always belonged to the Grunge Bands, who tended more towards metal. This is less true for the song “Lizzy” from the 1992 album “Houdini.”

Buzz Osbourne’s vocals are similar to grunge icons Vedder and Cobain. But the unusual verse and the rousing chorus stand in stark contrast to the grunge songs of the time – the Melvins have their very own sound.


With “Swallow My Pride” and the record “Come on Down” from 1985, the later “Mudhoney” members Mark Arm and Steve Turner laid the foundations for the Seattle sound. The album is considered the first grunge recording ever.

Here, the synthesis of metal and punk is already clearly apparent, even if the distinctive scratchy sound is missing, which the genre should later make up.


“Machinehead” may not be the best, but it is one of the last great grunge songs of all time. The British band “Bush” succeeded with their album “Sixteen Stone” from 1994 to unite all that corresponds to the ideal image of grunge. While most groups tend towards one direction or the other, “Bush” succeeds here in the perfect synthesis of metal and punk.
Also recommend:   Shower Songs: The 85 best songs to sing in the shower

The influences of “Nirvana” in “Machinehead” are still unmistakable, yet the song is on the border of alternative rock and thus marks the end of an era.


The third and most successful single from the album “Ten” by “Pearl Jam” deals with the suicide of 16-year-old Jeremy Wade Delle from Texas, who took his own life in front of other students and the teacher during an English lesson. As dark as the content of the song, as dark is the sound of one of the most popular tracks of the grunge era.


Hardly any album by the American alternative rock band par excellence, The Smashing Pumpkins, sounds as grunge as the legendary “Siamese Dream” from 1993. One of the best songs on the record, “Today,” is a glowing example of this. The Song is about depression and despair, but he hides this dark message under bitter irony.


Heart-Shaped Box marks the artistic culmination of “Nirvana” as a band and Kurt Cobain as a Songwriter, seven months after the album “In Utero” with a Shotgun took the life. The cryptic lyric is about Cobain’s fascination with the female body.

The rousing chorus, which resembles a cry of pain, and the hard guitar riff invite headbanging.


With its catchy, driving riff, “Spoonmann” by Soundgarden is one of the best songs from the hit album “Superunkown.” Originally written for the movie “Singles,” soundtrack, the single even received a Grammy award.

The track exemplifies a grunge sound is driven to perfection, which was increasingly professionally produced, and the smooth transition to alternative rock of the late 1990s.


Dinosaur Jr. never achieved great commercial success. Nevertheless, they were always popular among grunge fans as an insider tip. The song “Feel the Pain” from their album “Without a Sound” is probably their most famous hit and reached fourth place in the American Modern Rock Charts.

This is probably also connected with the then sensational video in which the band members play golf between the office towers of Manhattan.


Courtney Love was Kurt Cobain’s partner and one of the few women to make a name for themselves in grunge with her band Hole. She wrote the semi-acoustic song “Doll Parts” from her 1994 album “Live Through This” back in 1991.

Here she thematizes the budding relationship with Cobain and created one of the few known Love Songs, that shaped Generation-X.


The supergroup “Temple of the Dog” released only one album of the same name, but it has a lot to offer. The members of Soundgarden and Pearl Jam got together to memorialize their late roommate, Andrew Wood, the frontman of “Malfunkshun” and “Mother Love Bone”.

In the first single, “Hunger Strike,” Chris Cornell and Eddie Vedder sing in duet one of the most poignant rock ballads of their time.


The Screaming Trees are hardly known to anyone today, but in the early 90s, they were more than just an insider tip. The band’s music around Mark Lanegan, which was already founded in 1985, is considered one of the origins of grunge.

With “Nearly Lost You,” the formation succeeded in 1992 as one of their few hits. The song reached number five on the Alternative Billboard Charts.


Neil Young is not unjustly called again and again “The Godfather of Grunge.” For example, Kurt Cobain named Young’s music an important source of inspiration and even played several concerts with his idol.
Also recommend:   The 100 Best Funk Songs Of All Time

In 1979, the folk singer musically anticipated what would become grunge a decade later with a distorted, fierce version of “Hey Hey, My My” on “Rust Never Sleeps.”

No other music style has influenced the 90s as grunge did. But even in the new millennium, the wild sound of “Nirvana,” “Pearl Jam,” and Co. lost nothing of its meaning. As long as young people are looking for their place in society, these songs will echo through our world’s children’s and teenagers’ rooms.

The Best Ballermann Hits Of All Time

The 107 Best German Rap Songs Of All Time